I got into Albany, New York about 9:15 on Saturday. I went to my hotel, checked in, dropped off my carry-on, and got ready for what I understood was a one hour drive to Bethel. The ticket showed that the show was to start at 11:30, so I figured I'd be there in plenty of time. The plan was to meet up with Steve Louis (the owner of Sour Records who gave me the ticket) at 12:30. Lou Reed was scheduled to hit the stage at 1:00, so that would give us plenty of time to get together.

I left the hotel around 10:30. I had found directions to the concert site on the web, so I was following those. When I didn't get to the first exit until one hour into the drive, I knew something wasn't right. On the radio, I found a classic rock station that was the "official radio station" of the concert, so I stayed tuned.

Turns out the show opened at 9:00 AM, with the first act, Melanie, hitting the stage at 10:00. The second act was Donovan, and the third act was Richie Havens. About 12:30, I was on small back roads, but based on the directions I had, I knew I wasn't close yet. Shit. I'm s'posed to meet Steve any minute now, and Lou's on in 30 minutes. If I came all this way and missed any of the two acts I meant to see, I was gonna be pissed.

One of the DJs mentioned that they were going to introduce Lou Reed, and that he'd be on "real soon". Shit. I'm still nowhere close. Then one of the other DJs asked when Reed was supposed to hit the stage, and he said "around 1:30". YES! Just got a half-hour reprieve. Time to speed up.

Around 1:15, I knew I was getting close. I was seeing signs directing me to parking, so I didn't bother checking my notes from the web anymore. I'll just follow the signs. Around 1:30 I was entering the parking lot and parked almost immediately after getting in.

Gotta hustle. Lou's on any minute now. I see a gap in the trees in the far right corner of the parking lot where people are coming in and out. Cool. That's the exit. I walk straight for it, and pretty damn fast. When I get to the break in the trees, I see … another parking lot. Shit. This is getting far longer. Turns out I go through a few more parking lots like this. Frankly, it starts getting a little funny at this point, like a house of mirrors with no exit.

In the background, I hear the faint strains of Hendrix's arrangement of "The Star-Spangled Banner". Cool. Must be a tape, so Lou can't be on yet. Step it up. I finally get to the gate about 1:50. I can hear singing, but it definitely isn't Lou. Cool. I made it. My legs are achin' (from getting up at 4:30 and the long drive), but I made it. 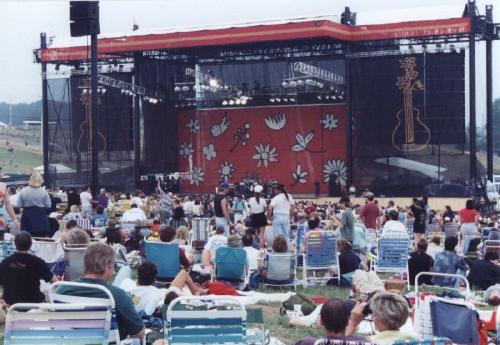 I go to the end of the T-shirt booths where Steve and I planned to meet up, but it's way past 12:30, so I figured I missed him. Over the hill, I can see the stage. It's a big festival style stage with big mesh speaker covers on each side with the "Day In The Garden" logo on each side. On the stage, Richie Havens is finishing up the end of an a cappella version of "On The Turning Away". Very nice.

I head over to a food tent to grab something to eat. There's a booth selling Philly steaks and hamburgers. Cool. A Philly sounds good. I haven't eaten a thing since 5:00 AM, so I'm ready for something big. I'm waiting, and the line ain't moving. Come on people, I can see they're setting up Reed's equipment. Move it, move it. The lady behind the counter asks "anyone want a hamburger?" No reaction from anyone … except me. I grab it, pay and go. Turns out everyone was waiting for a Philly and they were way behind on making 'em. I'll take anything at this point. I'm hungry, and I'm ready for the show. I go grab a couple of bottles of water and get set about 100 feet from the stage.

At 2:05, over an hour late (thank goodness), Lou Reed and band hit the stage.

At a lot of points in the show, the crowd's chanting "Looooooooouuuuu". After this one, the crowd starts up the chant again, and Lou starts "conducting" the crowd, pointing to the left side then the right then so on. Hell of a set. I'm glad I made it. Reed and the band sounded great. Lou left about 3:45.

Next up at 4:15 was Joni Mitchell, who I wasn't that familiar with.

To be honest, I wasn't that impressed. To be fair, the only song I knew was "Big Yellow Taxi", and I did enjoy that one. The rest seemed like pretty, flowing jazz. Maybe after Lou's overload this just wasn't what I was looking for. I'll tell ya though, the crowd loved her. A lot of people in the crowd were holding up signs saying "We love you, Joni", and similar sentiments.

Joni comes out for her encore (by herself) and talks about missing the first show 29 years ago. She said there was one song she probably had to play:

Yeah, it had to be done. It was nice to hear, although I confess I missed Neil Young's guitar and the harmonies from the CSNY cover. Joni was done about 5:30.

After Joni, a large portion of the crowd moved out and away from the stage. Perfect! I moved in close. Between the sound booth and the stage, there was a corridor down the center set off by 4-foot high barriers. I moved down about 25 feet from the stage and leaned against the barrier. Perfect. If I lean a touch to the right, I'm looking straight down the middle.

Next to me, a twenty-something girl smoking a joint meets up with two of her thirty-something friends. She asks "So, what's the deal with this Pete Townshend guy? Who is he?" What? I was torn between thinking "get the heck out of here then" and "listen up, you'll learn something". Her friend looked at her like she was from Mars and said "Pete Townshend? He was in The Who. He's a great songwriter, a real artist". Recognition kicks in now. OK she can stay. The guy who answered the question then turns to one of the security people in that central corridor and asks "So, who's on after Pete Townshend?" What? The security guy looks at him like he was from Mars and half-laughing, said "After Pete Townshend? No-one. You go home." About 6:20, Pete takes the stage … 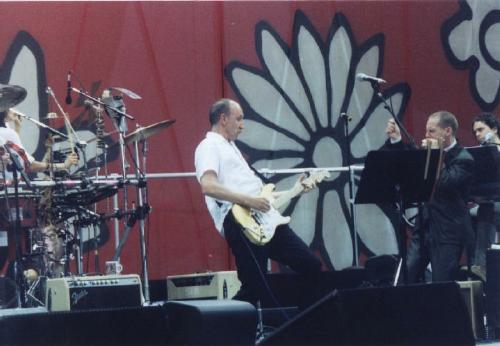 (paraphrased): "My last proper CD was Psychoderelict, which bombed. But, I can write opera … see?" Jon Carin plays a suitably dramatic chord or two and Pete goes into some wonderfully bad fake opera singing. "That was much better at rehearsal!" 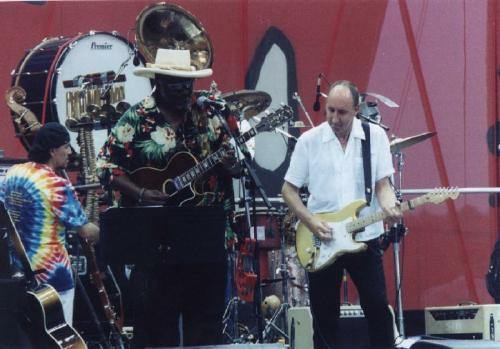 Pete introduces Tracey Langran. She was a dance captain and assistant choreographer for some of the Tommy plays. Pete heard her sing, and brought her along on this "tour" (a 3-show tour). Jon Carin and Jodi Linscott worked up an arrangement of "Acid Queen" (although it didn't seem that different) that Pete asked her to sing lead vocals on. Tracey's background vocals on other songs were so-so, but her lead on "Acid Queen" was great. Pete also hints that Tracey's arranged a surprise for later. 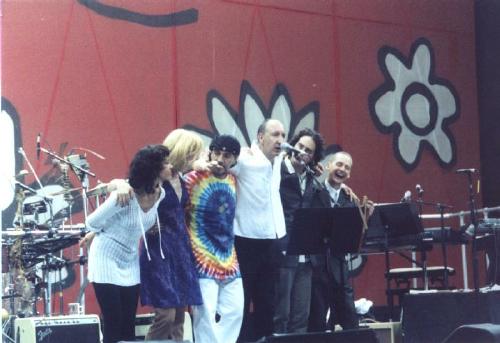 Time to head out.

Normally, when I'm at a show by myself, I tend to hustle my way out of the facility at top speed so that I can get a jump on traffic. This time, I stopped at the top of the hill and just kinda looked around for a minute to take it all in.

There was a band playing at the second stage, so a little of the crowd was hanging back. I got movin' and worked my way to my car. On the way, a thought dawned on me: As I got close to the site, I started paying attention to the posted signs rather than my directions. I also know the end route I took was slightly different than the directions listed. Shit. It's well after 9:00, and I've got a three-hour drive and a 5:00 AM wake-up call coming.

Heading out, I retraced my steps mainly by following the bulk of the traffic. As I got further, traffic thinned, but one pickup truck seemed to be taking the route I needed. As I could, I checked my notes, and it looked like he was heading back towards Albany. Cool. We'll follow this guy. The only problem was that he was doing 45 MPH around twisty, unlit, tree-lined roads. Yeah, I kept up. The first real surprise hit when it dawned on me that I hadn't made a turn that corresponded with my instructions. Shit. I should be on NY52 heading north until I pick up NY55 heading east. Where the heck am I? I keep moving anyway, and I finally see a highway sign. I'm on NY55 heading north. OK. I'm not on the road I thought, but I am on NY55, and north is the general direction I want to go, so if I'm wrong, I'm not totally fucked.

I eventually lose sight of the truck, so I'm on my own. I'm still on NY55 north, so I'm staying with it. After about 40 minutes, I see a sign for Liberty, NY that I remember passing on the way in. This is good. With any luck, I can figure out how to get out of Liberty the way I came in originally. Turns out it wasn't that tough. Somehow, I was on exactly the right road. I don't know how, but I hit Liberty at the same intersection I saw on the way in. Easy sailing from there home.

Back to the hotel. It's about 12:30, and I'm dead tired. The only thing I really noticed at this point was that my $109-a-night hotel room was, to quote Pete Townshend from the numerous Fillmore East '68 bootlegs, a "pisshole". The floor squeaked everywhere. I went to get a plastic glass full of water to take a Zantac, and when I lifted it out from under the tap, I flooded the vanity. Why? There was a giant hole in the bottom of the cup. Also, the toilet wouldn't flush. At all. I got curious and looked in the tank. The assembly was cracked an laying on it's side. Lovely. I fix it up enough to flush and go to bed.

Next day worked out pretty much as I'd hoped. I got the heck out of the hotel ASAP, got checked in at the airport on time, and I was home by 10:30 AM Sunday.

OK. Parts of the day were a pain (the drive, the early mornings, and the shitty hotel room), but the concert was absolutely worth it. Lou was amazing, and Pete was better than even I expected. Now I just need some bootlegs … come on people, I saw microphones in the crowd and they had big TV cameras roaming the stage …